As many veterinarians may know, after the terrible 2004 hurricane season, the FVMA, AVMF, and others contributed a lot to help the University of Florida College of Veterinary Medicine develop its “VETS Team” for disaster response.  Combined with the Florida Veterinary Corps, the VETS Team gives the state considerable capability to deal with veterinary issues during disasters.  What you may not realize though, is that beyond providing basic veterinary medical care with its “M*A*S*H” style team, performing infrastructure assessment, and assisting with logistical support to veterinary practices; the UF VETS team has developed a truly world class animal technical rescue team with the additional support from USEF, AAEP, US Rider, FQHA, and others.

The team members have taken the internationally renowned Technical Large Animal Emergency Rescue (TLAER) courses, and it partners with TLAER in putting on advanced programs here in FL; even conducting a week long training and assessment with USDA at Miami International Airport for the Import/Export Center.  Unlike many teams in the country, the core members have gone on and received advanced training in human technical rescue, having completed Technician level training in Confined Space, Swift-water, and instructor certification in high angle technical rescue.  These advanced skills allow the UF team to respond to a variety of rescues with and without the assistance of local fire rescue.  The team provides 24/7/365 animal technical rescue support within 2 hours of Gainesville.  It also provides the team with the ability to provide a series of ‘wet labs’ for the DVM students in the fall semester, teaching them animal technical rescue, with the hopes they will become a resource to emergency management in their community after graduation.  A local veterinarian providing sedation during a rescue and managing injuries is essential, and most agencies don’t have one on staff they can call.  As an added incentive for those students completing all the labs, a day of repelling at Ben Hill Griffin Stadium is included. 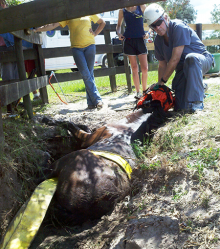 Because of the combined human and animal technical rescue knowledge, John Haven, the team leader and CVM College Director, was asked to join the National Fire Protection Association committee for search and technical rescue (Committee standard 1670), to co-chair the development of a first ever chapter on animal technical rescue – for both livestock and household pets.  Haven worked with subject matter experts from around the world for over a year to complete the draft.  This new national standard was just published in December 2013.  This is significant because without standards, training has been inconsistent, and as a result first responder agencies haven’t been allowed to use their training dollars to obtain animal technical rescue training.  Without proper training, some agencies have refused livestock calls, only to then have to respond to rescue the general public who tried the rescue anyway. In some cases, responders have been injured trying unsafe rescue methods, but under pressure to do something.

At the same time Haven began working on engaging the fire rescue community and the need for standards, he recognized Florida’s need for a training program, and trained teams around the state to perform animal technical rescue.  The state veterinarian’s office supported the needs from local emergency management to establish a network across the state.  A plan to use federal grant funds to acquire caches of equipment to station around the state in strategic locations, and to develop an approved course of training was developed.  While the state veterinarian’s office purchased the equipment Haven specified, which includes A frame cranes, rescue glides, mud rescue gear, harnesses, etc., he partnered with UF’s Institute of Food and Agricultural Sciences (IFAS)’s education team, to develop the only Department of Homeland Security Operations Level Animal Technical Rescue Course.  The significance of the Operations level class is that the students perform a complete rescue unassisted as part of a ‘capstone’ learning experience, demonstrating they are operationally ready to respond.  Grant funds have been obtained to provide training around the state.  There are now seven state supported teams in Florida, and Haven is in the process of providing a two year refresher training to the existing agencies.  Host agencies for the caches of equipment are: Walton County Sheriff’s Office, Gadsden County Sheriff’s Office, St John’s County Fire Rescue, Volusia County Fire Rescue, Polk County Sheriff’s Office, Martin County Fire Rescue, and Lee County Sheriff’s Office.  While these are the host counties, members of fire, animal control, sheriff, city police, county extension, and private DVMs from surrounding counties have been involved in the trainings; developing a true regional and multi-agency response capability.  The Lee County team is a great example of 5 counties training together on a regular basis, working together on calls, and in the past two years, having completed over a dozen successful rescues of livestock.  There are additional large animal technical rescue sources at Wellington Fire Rescue, Southwest Ranches Fire Rescue, and Miami-Dade Fire Rescue (two caches).  Essentially anywhere in the state there is now a cache of equipment, and team, within two hours response.

The UF VETS Team has been involved in several high risk, high reward technical rescues since developing its technical rescue skills in support of local emergency management.  Some of the more notable include the dog “Joe” extraction from a 50ft hole during a night rescue, the horse “Midnight” from the Paynes Prairie mud flat on a Christmas Eve, and two cows in water at the bottom of a 35 ft sink hole in Levy County.  The team has also provided “Smartphone Rescue Assistance” to teams that have arrived on site, sent a picture of situation, and called for a quick consult to ensure their plan is solid. 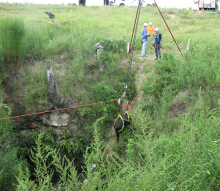 Never wanting to be complacent in disaster response planning and training, Haven just recently completed “Animal Technical Rescue 2.0” the first re-write of the animal technical rescue course since its inception in 2011 – completely embedding the new NFPA standard material, including both large and small animal technical rescue.  Recognizing the comprehensive nature of the course, other veterinary colleges have contacted UF about credentialing a team of instructors at other schools to provide the course.  Additionally, UF CVM has developed a ‘turnkey cache’ of equipment that local governments can purchase, and UF will configure the kit for them.

For those wanting to know more about the VETS Team, or animal technical rescue, Haven can be contacted at havenj@ufl.edu or his office at 352-294-4254.